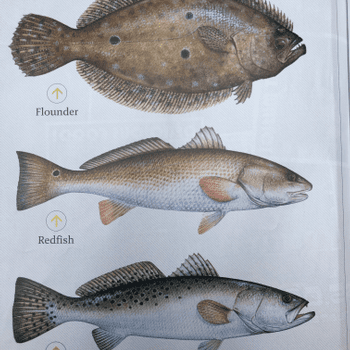 Do you have questions for Mark M?

Log in to ask Mark M questions publicly or anonymously.

im sure this is not new with me and about as simple as dirt to do but I had a piece of leftover EMT and I thought hey why not make a hook out of this piece instead of letting it just sit there and in this case I’m hanging things that are very light but I think it might be wise to crimp or otherwise strengthen the connection there where it’s flattened. I just took a 3 1/2 foot piece of conduit, bent one end into a hook shape, flattened about 6 inches of it drilled holes and then hung it through ceiling stud. again for my application it’s strong enough to hold up the light items that I put there but I think I would fold or crimp or something the conduit there where the flatten part ends and the non-flattened hook begins because it could be a little weak if it were are use like this.

However if it were placed vertically on a wall (whereas this is horizontal on the ceiling,) meaning screwed into the wall vertically in a stud and then the flat piece was bent so that it would hang on the wall then I think it will be strong enough to hold most anything for this size conduit. oops, just realized this doesn't use any maker pipe parts but i have plenty others posted that do. 😜

*bonus*: also not original with me and unfortunately I have forgotten where I saw it but the el cheapo plastic pipe hangers (white things shaped like a “ J ” in the background) - you can get the big box stores - are perfect for hanging fishing rods from the ceiling like a buck apiece in the plumbing section and you can use to hang rods or extra pieces of conduit or anything else that is long, from the ceiling. plus, its very easy to take the fishing rod our for use and same with putting it back up when done. 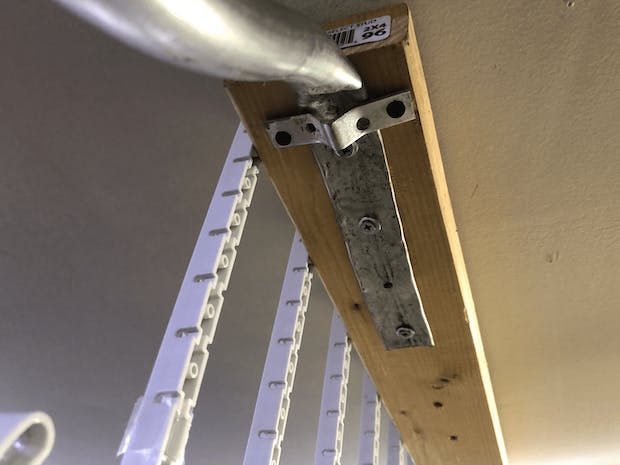 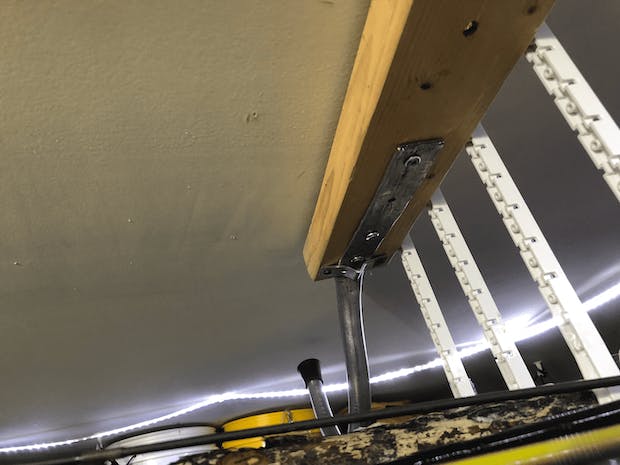 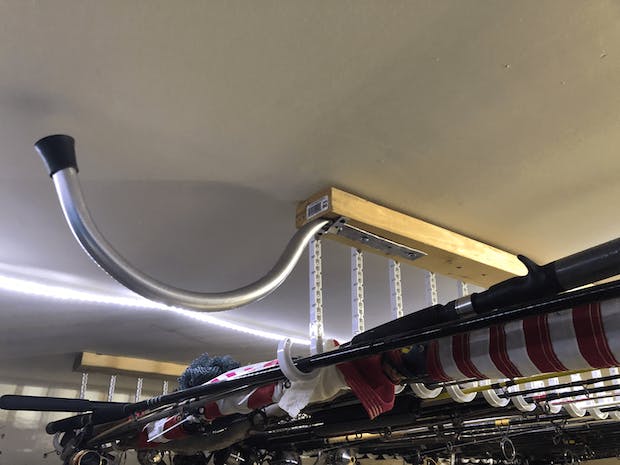 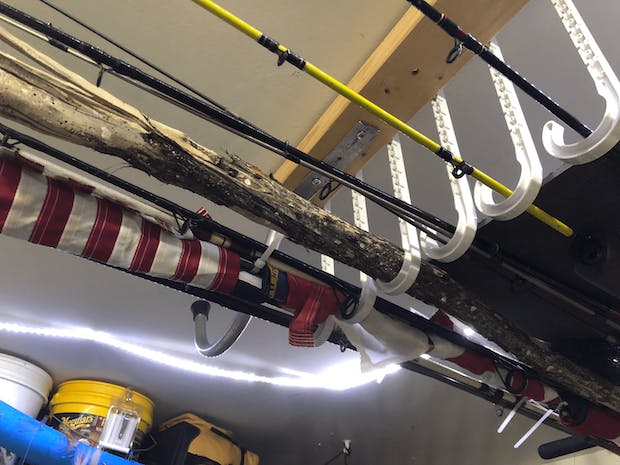 Liked by David Schlitter and 5 others

an air dam to hopefully help with the major air drag (at highway speeds) caused by the yakima fishing rod holder i have on my van - hurts fuel mileage, i suspect. it is too much work to take off yakima rack system when not using but this air dam will be placed just like fishing rods would be, but using the same holder (the 'fishing rods' in this case are emt rods) which has a metal air deflector angled at abt 45 deg on the front (where you see cardboard as a proto type only now, of course)

carbon fiber would be cool but too expensive, so i used a 10" x 30" aluminum plate and 2 more support bars that are perpendicular to the rods that go through the 2 yakima braces. easily removable.

i had used a jackson pollack-esque paint treatment, where i used a more contrasting gray paint dribbled paint on a black background, then i decided to take it down a notch and just use that as a pattern / relief instead, so i painted over it with black. now its more of a texture than an actual design. 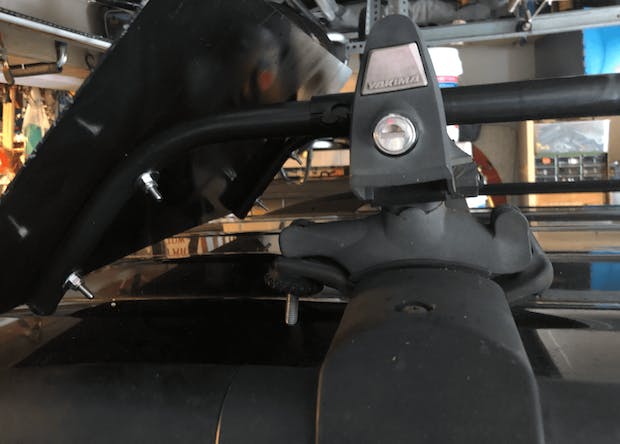 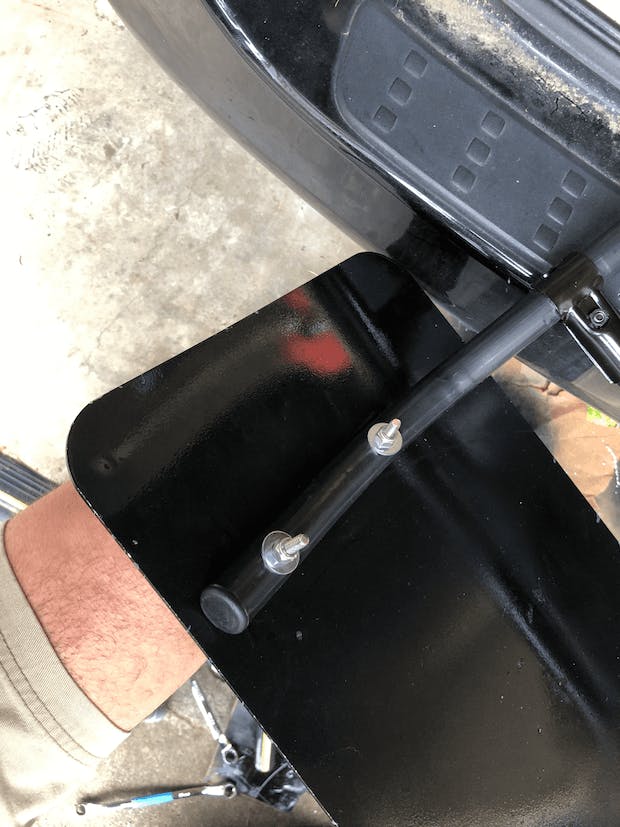 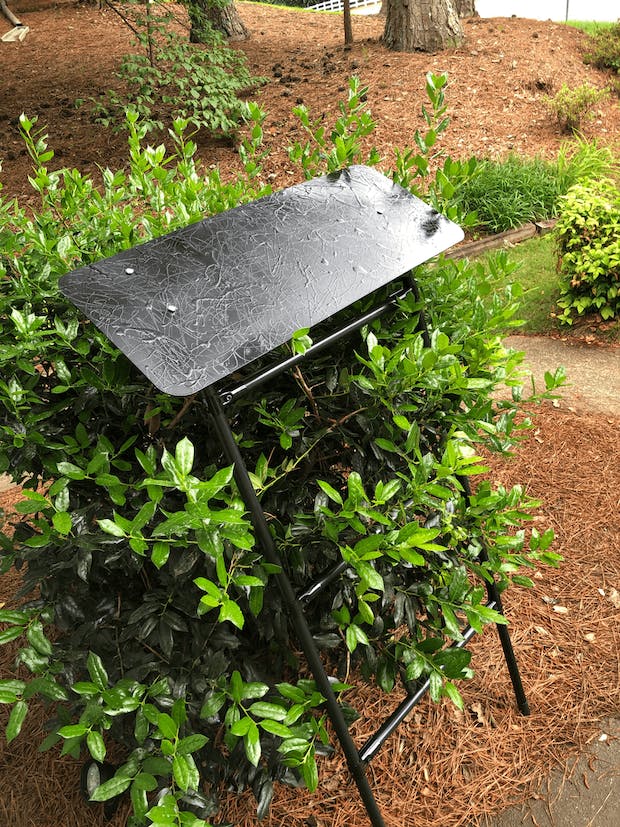 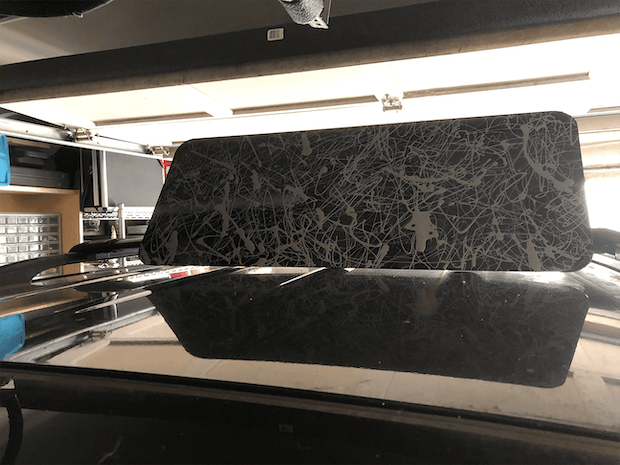 here is one of a beach cart i just did. and then redid. used kayak rolling wheels both times but the 2nd time (using yellow wheels in pics) after some fiddling was better. the first try showed me why ppl build these things with 4 wheels and not 2, if you allow the wheels to swivel front to back like my try #1. the wheels were constantly rolling under the emt. i was trying to set it up to be detachable and have pivot ability when on sand but when trying to load it with mill crate and cooler the wheels would run under the whole thing. anyway, took apart and moved on to try #2. this time used a diff set of kayak wheels (yellow, also removeable) and removed parts of it, some of its angles and used just the “upright” part of the wheel and frame as a horizontal piece, then attached the emt to that. also bent the 2 pipes to cross each other and make a circle for the 5 gallon bucket to drop into, along with “ribs” to hold cooler in place. (then, for backmost item, at the rear nearest wheels, for the milk crate, and ill bungee it as needed but its heft will likely keep it in place. the white flat thing that follows the arch is a cutting board.

then i shrink wrapped all the stuff, added stopper plugs, fishing rod holder, and a “kickstand” that allows it to stand upright for storage on location. though at the house store it horiz on an angle iron ceiling shelf. go figure. etc. bent the back upright base emt to support the kayak fishing “milk crate” , small 14 qt cooler and then a 5 gallon bucket with the cast net in it (which later becomes a bait bucket with aerator)

i just sorta made it up as i went along, after some sketching. i see better now, like i said, why ppl use 4 wheels on not just 2 and why ppl build or have it as a cart, like a wagon, with 4 sides and an enclosed box. the further things get from the wheels, in my setup, the heavier it is. still manageable and not terrible. its funny how real life builds present problems the sketches didn't show. and by not having a cart/box it is much easier to store. the white arch area is a plastic cutting board i trimmed.

any comments, questions or whatever welcomed.

next up (last 8 images): air dam/deflector for existing yakima rod/ski rack system on top of van

making an air dam to hopefully help with the major air drag (at highway speeds) caused by the yakima fishing rod holder i have on my van - hurts fuel mileage, i suspect. it is too much work to take off yakima rack system when not using but this air dam will be placed just like fishing rods would be, but using the same holder (the 'fishing rods' in this case are emt rods) which has a metal air deflector angled at abt 45 deg on the front (where you see cardboard as a proto type only now, of course)

open to ideas on material - carbon fiber would be cool but too expensive, so prob a 10" x 30" aluminum plate, maybe a "5052" grade? like 1/8" thick, with an emt rod across the back of the plate for support, and 2 more support bars that are perpendicular to the rods that go through the 2 yakima braces 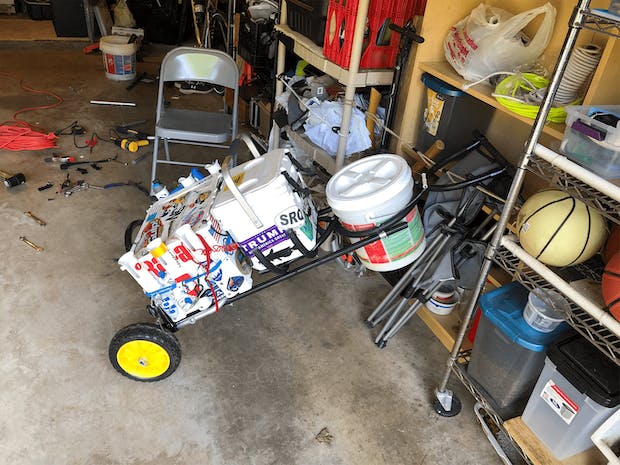 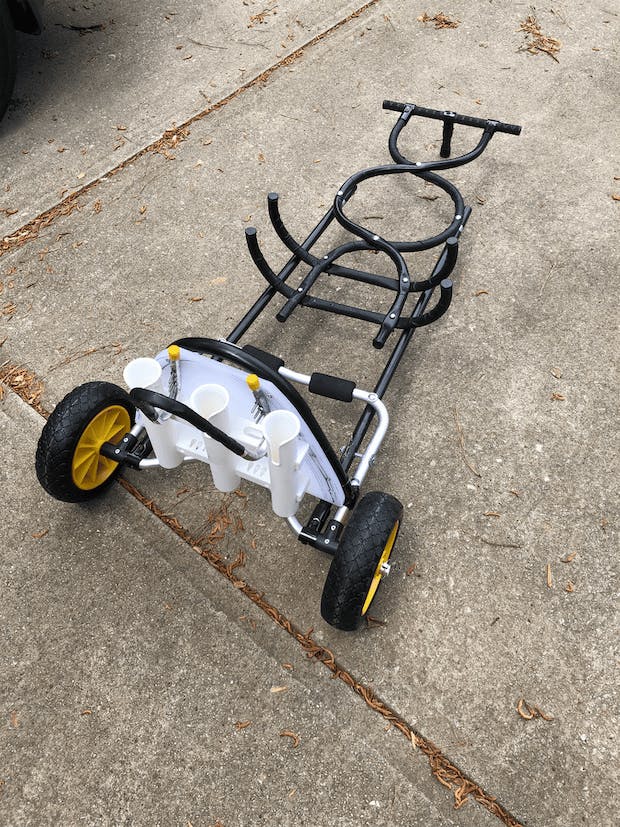 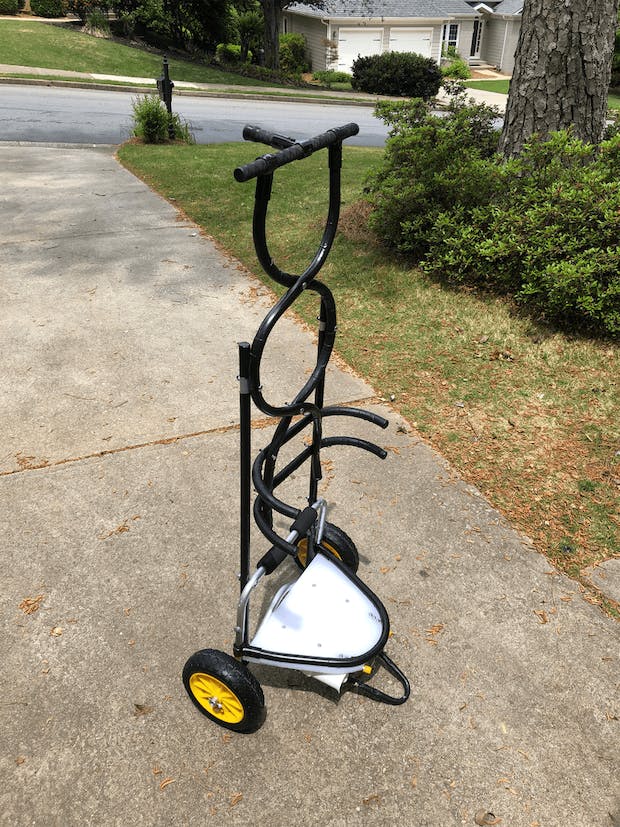 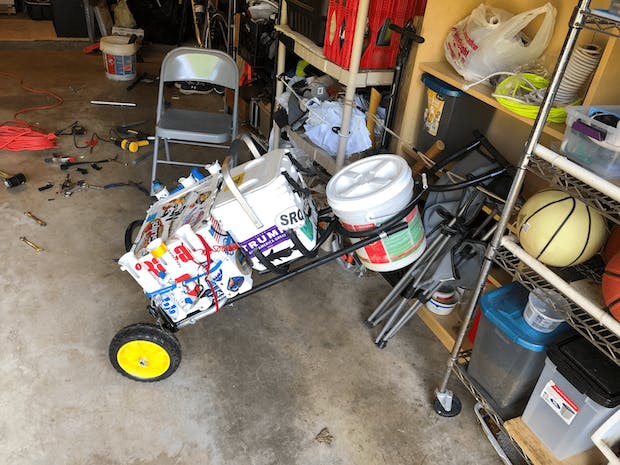 Liked by Jake Lewis and 2 others