Used Maker Pipe 90s and 180s to build a lean-to canopy. This simple build was made possible by the Maker Pipe and the marine bimini mounting hinge brackets. Hinges are stainless steel, two parts. The receiving bracket uses a spring pin to hold the pipe-mounted eye bracket.

We got lucky in that this section of the deck is exactly 8’ wide. The 10’ EMT overhangs the railing perfectly.

The design is made of 5 sections, each 10 feet wide from house to rail. The sections are 4, 6, 4, 6, 4 in that order, measured on center of the pipes so a 24x10 tarp fits perfectly (tarp trade sizes are 6 inches shorter in each dimension to account for bungee tie mounting). Thanks, Maker Pipe! 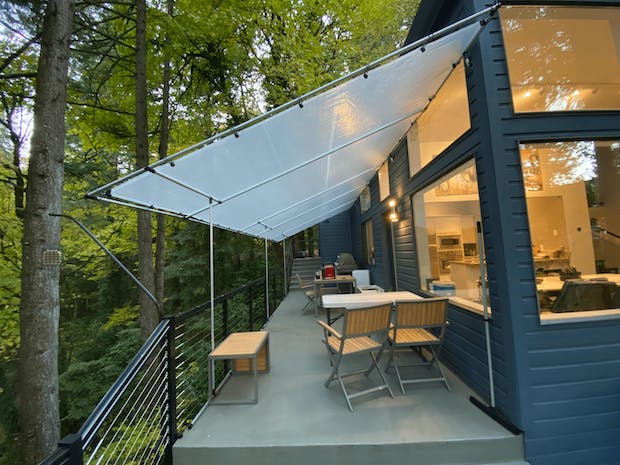 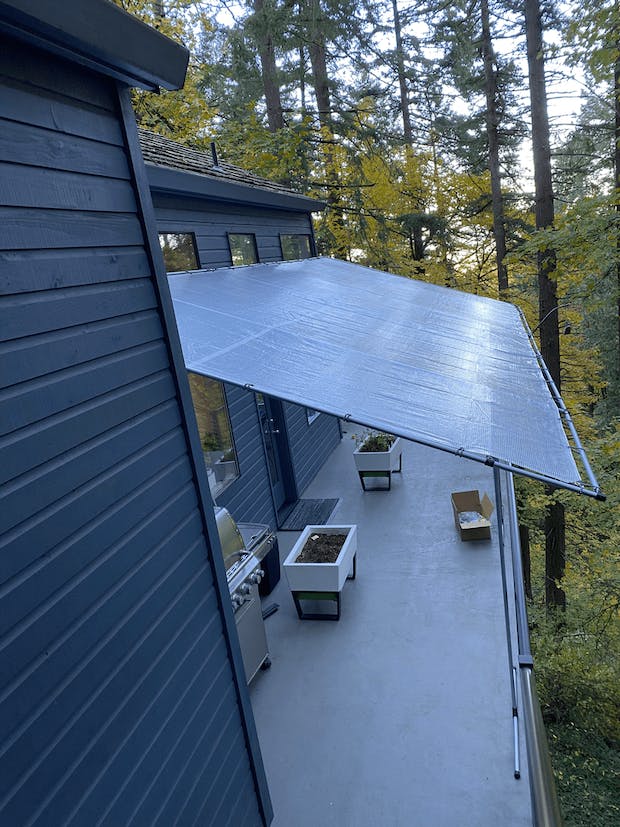 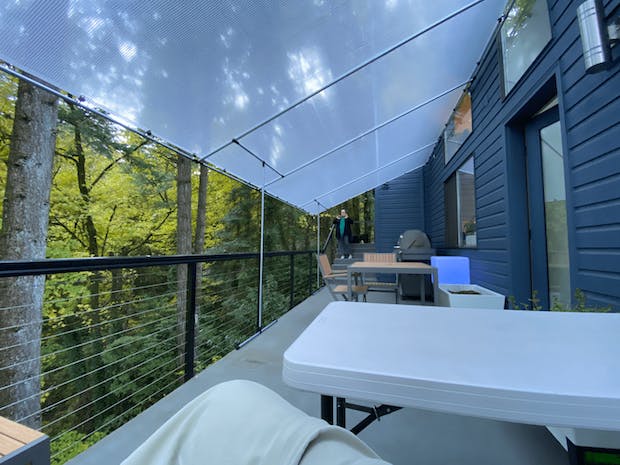 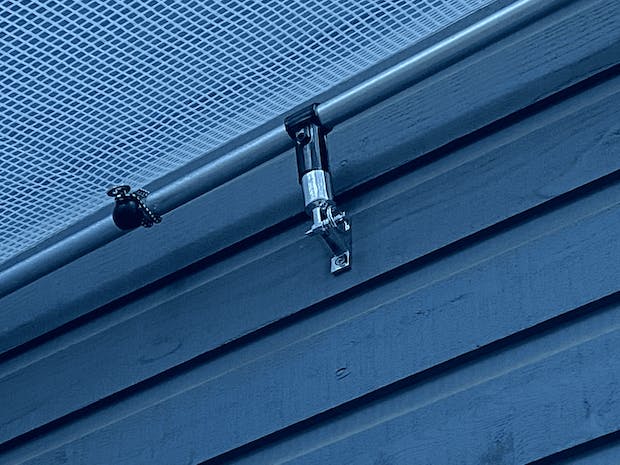 Liked by Kelly Schlitter and 11 others 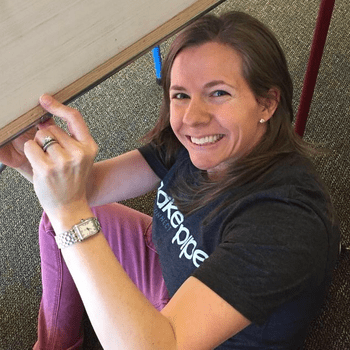 Randy
2 years ago
Thanks. Maybe folks have discussed this, but one thing I did that helps make for a cleaner look is to remove all of the stickers from the home store. After peeling stickers, acetone on a paper towel made fast work of cleaning off residue and factory dust.
2

Randy
2 years ago
One question I have seen come up on other designs is: “On corners, why didn’t you use 90s for rigidity and strength?” In my case, I definitely could have done that, but my design was going for a 10-foot width exactly. The convenience of using full, uncut 10-foot EMT for the diagonal eaves worked perfectly for the width of a 10-foot tarp. Had I gone with 90s on the corners, I would have had to cut the 10-foot pipes on the outside eaves, removing 2.5 inches or so to accommodate the connector. With a T-connector, the pipe goes right through to the edge. This makes all diagonal pieces exactly the same, no cuts, so easier to re-assemble next year—no special end pipes.
2

Jake Lewis
2 years ago
Randy That makes alot of sense for a project like this. Thanks for sharing the tip!
0 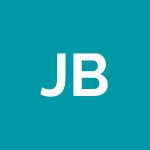 Julia Bergren
2 years ago
So simple and clean, perfect pitch for the northwest! What kind of tarp is that? did you do the grommets?
0

Randy
2 years ago
Julia Bergren it’s a clear PTM tarp—fiber-reinforced polyethylene. I got it from Creative Shelters operating out of Eugene, OR, but there are sellers on amazon. The material is fiber embedded, so although it is clear, it has a 3x3 mesh grid (three fiber lines per inch). Imagine a very heavy, clear shower curtain with fiber—like dental floss— running as a grid of little squares. It lets in a ton of light, which was very important for me in the PNW. The fiber also make it very strong.

The grommets are standard, 36-inches on center with reinforced corners. With 10x24 foot dimensions, these tarps are setup so that that the size you buy is nominal—in the tarp trade, it is standard that they come 6 inches or so shorter in each direction than the stated dimensions. This is so you can setup a frame to the exact value, and use the ball/bungee ties to attach the tarp which is perfectly adjusted for this technique.

This is a very nice tarp, and unless a huge branch falls from our Douglas Fir trees, I expect we will be able to use it for years, though we do plan to disassemble everything this spring. Once it stops raining in Portland, it doesn’t start up again until October (shhh, don’t tell anyone that detail).

The vendor I found intended this tarp to be used with steel canopy fittings which are also designed for EMT, but I am so glad I found Maker Pipe before buying that stuff. It would have been much heavier, fixed angles, and nowhere near as versatile.

Since the initial build, a few things have evolved. For example, I have now swung the upper eave down BELOW the bimini mounts into a much more stable position. I also removed the horizontal “feet” from the three leg posts and put the rubber knobs over the ends. To immobilize the legs so they don’t lift during wind, I had them attached with a short pipe and T connectors to my Glow Pear planter boxes, but I have since removed this and added some stubs that hook under the deck railing. This technique works really well, as I am using the same rubber feet on the stub bracket and have it attached in a way that creates compression on the leg, from the deck floor up under the railing. The legs are therefore wedged in place. I cannot lift them a millimeter now.
0

Randy
2 years ago
I just added a new photo of the updated leg posts to show how I have them tightly fitting under the deck railing. I did not want to attach hardware to my rail, drill more holes etc., so this satisfies as a non-destructive and removable solution. I plan to do something similar with a bird feeder soon.
0

Jake Lewis
2 years ago
Someone on YouTube is interested in the total cost of your canopy project. Any rough estimates on the cost?
0

Randy
2 years ago
Great question. The short answer is $313.85. The breakdown looks like this:

Randy
2 years ago
Ok, so, if I had to do it over again (and in a way, I am doing it over), I would add a piece of 1/2 EMT and skip half of the bimini part. I stand by the wall-mounted hinge bimini bracket with its spring-pin attachment. But, I am currently building replacement eye brackets that are way more secure. I could have saved $30 by skipping the eye part and only buying the hinge/pin half of the bimini parts.
1

Jake Lewis
2 years ago
Thanks Randy, I will share with the person on YouTube. I appreciate you breaking it down!
0 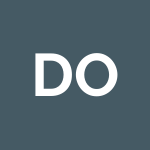 Daniel Odulo
2 years ago
What was the size of the bimini pipe adapter that fits so perfectly in place of the 3/4" EMT? Also: why did you find those less secure than those made out of EMT?
0

Randy
2 years ago
Daniel Odulo I will mention a couple of things to answer your question. The first is that I used a 7/8” OD bimini, but I should have gone with 1”. The bimini eyelet bracket (which I removed from the rebuild and replaced with my own) doesn’t actually fit into the Maker Pipe at all. I had to fabricate a stub of 3/4 EMT. This EMT stub went up inside the bimini part, secured with two set screws using a tiny hex key—typical and expected design for holding an eyelet fitting over a pipe. The other end of the EMT stub is just long enough to go inside the maker pipe connector all the way until the bimini stainess steel sits flush with the black maker pipe. It only looks like Maker Pipe is capturing the bimini bracket—but there is an EMT stub inside.

I initially found this setup to work fine, but it was very difficult to squeeze the 3/4 EMT stub into the 7/8” bimini eyelet bracket. The OD of 3/4 EMT is just too big. I tried to expand the bimini opening with a dremel, but this was just too difficult. The stainless is really hard, and sanding it or filing it with a rotary tool took too long. I eventually decided to cut into the EMT along its length for an inch or so, then compress the conduit end into a smaller diameter. I then hammered this EMT stub into the connector. I made sure to drive it all the way in so it could be captured by the set screws. This worked fine, but could have been avoided with an eyelet setup for 1” OD.

I was a little worried that my stub would slip out of the eyelet part given the diameter modification I had to make—but this was overlooking a different blind spot—the friction hold of the Maker Pipe fitting. When my canopy failed, it was because the stub slipped out of the Maker Pipe. There is, in fact, some limit to the “hold” strength probably as a function of how hard you torque down the Maker Pipe bolt. As strong as it is and as relatively easy it is to build sturdy solutions, you cannot expect it to hold several hundred pounds of snow that you are bouncing from below without it slipping.

This is why I abandoned the eyelet part of the bimini in favor of a 1/2” EMT stub squashed flat at each end with holes drilled through. On the bimini side, a hole allowed the pipe to be captured by the wall-mounted bimini spring-pin bracket which I kept. This works great and I highly recommend using these for detachable wall mounts. On the other end of the 1/2 EMT stub, the compressed end goes past the constriction in the Maker Pipe T-connector so that the Maker Pipe bolt can slip through the hole in the EMT! Voila—a solution that is both quick release (using the wall mounted bimini bracket with pin) as well as super secure—bolted holes prevent the Maker Pipe from slipping off no matter how hard or loose it is tightened.

This was the final solution for the rebuild I could have saved 30 bucks by skipping the eyelet parts. The canopy now would have to rip out 3 inches of stainless steel wood screws (2 each bracket) that are mounted to the studs in order come off. The other pipes and the poly canopy would fail before that happens I think, but I feel much better about my homemade eyelet brackets and will consider through-hole mounting in the future when needed. Mario I. Arguello has some good ideas he posted using an arbor press and a die to compress 3/4 EMT for this same purpose. I don’t have a press, so I used 1/2 EMT in a vice to get mine to work that way.
1